When I was thinking of how I wanted to use my massage education and career to help people through massage, I realized I needed a name and logo for my own business. One morning, in that state somewhere between sleep and awake, my mind snapped to “Allgood Therapeutic Massage” – or ATM. I know it’s really original, seeing as how my maiden name is Allgood, but still, I hadn’t been coming up with anything else appealing to me.
Next step: logo. This was a bit of a process, but before I go on, I need to explain some of my “previous life” before massage.
In 2001, after working at the same place for 10 years, I was getting a bored with my job, as it was the same thing every day. Even though I had started at the bottom of the totem pole after graduating college, I had finally worked my way up through promotions and figured I was at the highest I could go with this employer. Then, one day, they posted a new position that interested me tremendously: Documentation Specialist. Basically a technical writer, it seemed like the perfect job for me: using my love of writing with my fledgling techy geek abilities.
A couple other people applied for it, and I know it was a tough decision for the bosses, but they finally gave me the chance to step out of my monotony and into something that stretched me more than I could have thought possible at the time. Through the support of my supervisor and the director, I even was co-awarded “Employee of the Year” only two years after receiving that promotion because of all I had learned and done in that time!
My director, Chris, had put so much trust in me that in off-hours, he had me teach his wife how to use Adobe Photoshop. I’m not sure how great a teacher I was, but nonetheless, he and his wife treated me to dinner at a local Greek restaurant where I learned about moussaka, tzatziki, and orzo soup.
He also shared with me (and anybody) his passion for the bonsai and its meticulous care to maintain and nurture these beautiful plants.
It was also around that time that Chris had been diagnosed with cancer and had begun intense treatments to erradicate it.
In 2005, my fiance and I had planned a surprise wedding for our guests in our backyard, mostly because we didn’t want all the formality of a big wedding. After guests were enjoying some live jazz music, we announced that we were getting married, and proceeded to go inside to get dressed in our “attire.” While I was getting ready, I kept asking, “Is Chris here? Is Chris here yet?” I did NOT want to “walk the aisle” unti he was there.
Sometime later after all the cancer treatments, Chris gave me a pendant – a glass “ball” with a bonsai inside. He explained that they were made special, individually, and he was giving them to those in his “circle.” 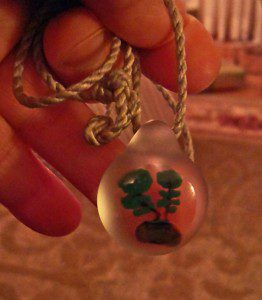 To say I was blown away is an understatement. Honored. Definitely. Speechless.
I think I had to walk away quickly before I started bawling right in front of him!
The cancer finally won and he passed away at home on January 25, 2007, exactly six years from the date I am writing this.
Back to my logo. Many times, massage is associated with the Asian culture, so I was thinking about that and remembered how Chris loved his bonsai trees, and I cherished the pendant he gave me. I began thinking that a bonsai tree, designed correctly, could resemble a “T” – as in Therapeutic. In similarity with the care and nuture of the bonsai, I wanted my clients to feel that as well.
I finally had the main concept of my logo: a bonsai. Everything else is superficial.
So when you see me in my office, I will most likely be wearing my pendant so it can remind me of why I do this.

This site uses Akismet to reduce spam. Learn how your comment data is processed.